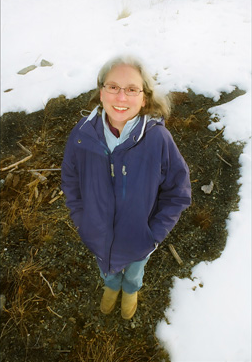 Nancy, who makes her home in Homer, Alaska, is passionate about place, history, and the natural environment.  From her many years of commercial salmon fishing and, later, work as a naturalist and historian on adventure cruise ships, she’s explored in both fiction and nonfiction the myths and realities of life in the north.  Among her published books are three collections of short stories and five works of literary nonfiction, including the memoir Fishcamp, the cautionary Beluga Days, and the front-lines story of climate change, Early Warming. Nancy was honored as Alaska Writer Laureate for 2008-10, a term during which she traveled throughout the state to promote Alaska writers, writing, and libraries. Nancy is originally from New Hampshire and holds degrees from Hampshire College (B.A. in liberal arts) and Vermont College of Fine Arts (M.F.A. in fiction writing.)  She currently teaches part-time at the Kachemak Bay Campus of the University of Alaska and in the low-residency M.F.A. program at the University of Alaska Anchorage.  She's part of the core faculty at the annual Kachemak Bay Writers' Conference. Her awards include fellowships from the Alaska State Council on the Arts and the Rasmuson Foundation, a Pushcart Prize, and a number of artist residencies.  Her work has appeared in many magazines, journals, and anthologies, including Best Spiritual Writing, and she sometimes guest-blogs at 49 Writers. Nancy is also actively engaged in conservation and community-building causes.  She’s served three terms as a trustee of the Alaska Conservation Foundation, including as chair, and, before that, she chaired Homer’s successful New Library campaign.

Other Works by Nancy Lord